Fughetta "after Handel" (in G major)

Fugues in A flat major, A minor, F minor

Adagio in A flat major

Andante in A minor

Fugue in A minor

Karel Blažej Kopřiva (1756-1785) was a very talented composer that lived in Citoliby and died at the age of 29. His Fugue in F minor paying homage to his teacher Josef Seger is built on the inversion of the theme of that composer´s well-known fugue "When the Prussians Bombarded Prague in 1757" in the same key. "Debefe" is musical anagram of the name of Josef de Boeufe, a patron of music, used as a theme in his Fugue in D minor.

Jan Křtitel Josef Kuchař (1751-1829) was an organist at the Premonstratensian Monastery of Prague-Strahov for nearly 39 years. He helped to prepare the world premiere of Mozart´s Don Giovanni in Prague in 1787 and made piano scores of several of Maestro´s operas. So the Adagio in A flat major has a theme rather similar to the Romance of Mozart´s Eine kleine Nachtmusik. Reminiscent of the popular Christmas music are the Pastorals in C major, G major, and the Pastorella in D major. The Fantasias in D minor and E minor show a larger form.

Jan Zach (1713-1773) was originally a violinist and organist in Prague, later an archiepiscopal Kapellmeister in Mainz. His Fugue in C minor is an instrumental transcription of Kyrie from his Requiem, the Fugue in D major was discovered in Dresden, and the Fugue in A minor is probably the most impressive Czech Baroque composition.

Jan Hora (b. 1936 in Prague) studied organ playing with Prof. Jiří Reinberger and Prof. Johannes-Ernst Köhler. He won prizes at the International Bach Competitions of Ghent (1958) and Leipzig (1964). In 1965, he started concert activities abroad (most of the countries of Europe, the U.S.A. and Japan). At present, he is head of the organ departments of the Musical Faculty of the Academy of Arts and of the Prague Conservatory. He is also the editor of organ works by Jan Křtitel Josef Kuchař. 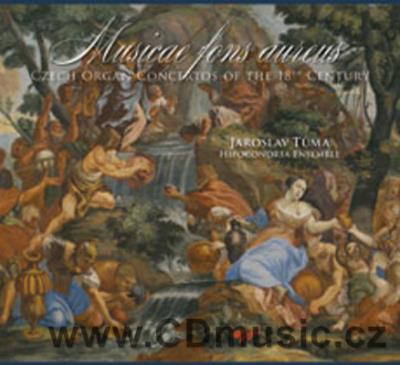